World of Indines Wiki
Register
Don't have an account?
Sign In
Advertisement
in: Characters, Striker, Characters in Argent: The Consortium,
and 3 more

First appeared in Strikers as a backer created character, her second appearance was as a supporter in Argent: The Consortium. Alumis is a Backer's Choice character in Fate of Indines, where she was voted in in first place. She is a Professor of Umbramancy who is a Rasp ; she uses her ilusion powers to disguise herself as a human woman.

Hearing rumors of a diabolic relic that grants great power to its wielder, Alumis has journeyed across the planes of Indines to find it for herself. While doing her research at Argent and interacting with humans, Alumis uses the illusion of a young woman. Her true form hides behind this guise in the shadows, and is much more frightening.

An old and ancient Rasp, Alumis is highly skilled in illusion and the shadow magic of her home plane. She is tricky and difficult to pin down, being a master of fear and illusions.

A: If the opponent is moved, the marker will move with their standup as normal. (Source: Fate rulebook) 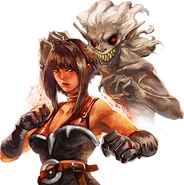