Boris Rumaldi is one of the Backer's Choice characters to be potentially included in Fate of Indines. He originally appeared as the neutral Bartender in Seven Card Slugfest.

Boris is a bartender who seems to have the absolute worst luck in all of Indines. He owns a number of bars, and a fight always seems to break out whenever he is on shift. Despite the extreme damage caused and the supernatural powers employed by many of his patrons in these disasters, Boris always seems to survive. 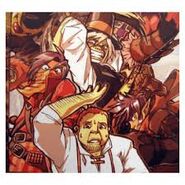 Boris fights mainly by running away and throwing various items he finds in his bar at opponents. He has a wide variety of tools at his disposal, making him much harder to predict than the typical fighter.