First featured in Devastation of Indines, Byron Krane is an immortal dark magician searching for power.

The forgotten 'fifth hero' of the Centennial Wars, Byron is the second-oldest member of the cast of Devastation of Indines (the only longer-lived character being Adjenna, the Dragon Queen). Once a human sorcerer, Byron abandoned humanity over a thousand years ago to become an immortal Lich, a creature whose soul is bound to the world by chains of magic.

Byron's complete soul is kept hidden away, but a fragment of it is stored in his mask, and it is this fragment which sustains him as he goes about his business in the world. His physical form is completely invulnerable, and his only weakness is his mask. If it is destroyed, he must retreat back to seclusion to create a new one before he can venture out into the world once more.

Throughout history, Byron has appeared to attempt to seize power in the world of Indines, but as of yet, he has failed to succeed. Most recently, he betrayed the Overlord Rexan, and attempted to seize control of Gesselheim after the death of the latter. When a scheme fails, he erases his mention from history, then moves on to prepare for the next plan.

Few if any know the true extent of the perils he has inflicted on the world--or the disasters he has helped to avert. It is due to his intervention that the world is not ruled by the Overlord of Gesselheim, that the Dragon King remains sealed, and that the rift in Jeffreys does not widen and swallow the world. Each age sees him torn again between saving a world that has rejected him as its master countless times, or finally deciding to watch it burn.

Now a professor of Mysticism at Argent University . Byron has been a mentor to Lesandra for the greater part of her life, and he has passed on many of his secrets to this young apprentice. She thinks of him as a favorite uncle.

Byron appears as a tall and slender man with pale skin, long straight hair (greenish to black depending on the depiction). He wears a half mask on the right side of his face with thorn patterns over a white surface which acts as his personal phylactery .

Usually dresses in formal suits showing his status as Vice-Dean.

Probably one of the greatest sorcerers alive. He surpasses Rexan in power and is said to match Adjenna or even Greyheart. His pupil Hepzibah is also a remarkably powerful individual. 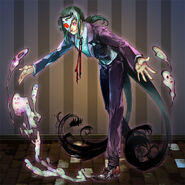 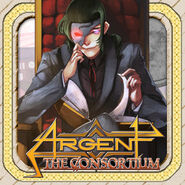 Alternate Art Byron
Add a photo to this gallery

A: No. They are counters and aren't influenced by anything affecting tokens. Rather than that it is just a place where you manage Byron's counters. (Official FAQ)

Retrieved from "https://indines.fandom.com/wiki/Byron_Krane?oldid=8614"
Community content is available under CC-BY-SA unless otherwise noted.