World of Indines Wiki
Register
Don't have an account?
Sign In
Advertisement
in: Characters, Characters in War of Indines, Willati,
and 4 more

Created by Magister Bors Vilnar of Willat, Cadenza is a custom model of automatic soldier that runs on steam and clockwork. This particular model is Vilnar's personal prototype, outfitted with a number of customizations and a remote module that allows him to be controlled by the Magister directly. Cadenza is currently deployed to track down Lixis and Kehrolyn and return them to Willat, dead or alive.

This model was able to work under Rukyuk 's direct supervision, but Vilnar could also seize control of it at any time and directly drive it. That capability, plus a number of additional hidden weapons make that particular Cadenza prototype much more threatening than a normal drone.

The Cadenza model are clockwork soldiers - made of brass and steel and armed with wicked sword blades.

Cadenza feels no pain or fatigue, simply attacking until it or the opponent falls.

There are a lot of Cadenza-model drones going around the world. They have limited AI, and are Willati shock troops. Their typical combat routine is to airdrop into battle from an airship and ruthlessly destroy anything wearing the wrong colors. If you're carrying the right rank badge, they accept voice commands, and they can't refuse to obey an officer's command (except under the orders of a higher officer). 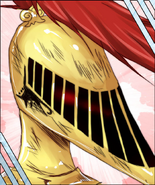 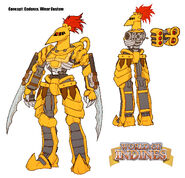 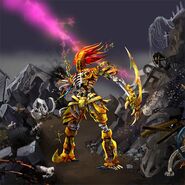 A: No. The token gives him Stun Guard ∞ when spent, so an effect that ignores Stun Guard will still take precedence.