World of Indines Wiki
Register
Don't have an account?
Sign In
Advertisement
in: Characters, Characters in Devastation of Indines, Striker,
and 3 more

César is one of the Backer's Choice characters included in Devastation. He was the second most popular choice from the pool of 14 characters.

The Reliquary is an ancient and powerful organization that polices the world for powerful artifacts from ancient times. Hunters like César scour the world to contain dangerous relics and to stop those who would use them for evil purposes. César would have died long ago, but a powerful relic replaced his heart and sustains his body and mind, making him immortal. Though there is one problem with the core, it requires power to run.

In the past Cesar has tried to escape the Reliquary but it has always ended the same. His core will shut down and agents will be sent to retrieve him. After a few centuries he has resigned himself to his work though he now has a grim sense of humor about the whole situation.

In Combat, César utilizies an Ironstar. This is the same weapon Joal carries, however, for César this is a main weapon. The Ironstar is wielded similarly to a combination of tower shield and broadsword. This weapon, combined with César's natural toughness, makes him a formidible fighter who is difficult to defeat. 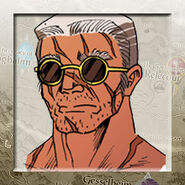 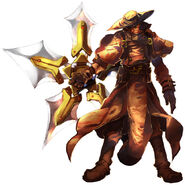 A: He gains a Threat Level Counter but not the attached effects he would gain during the ante phase. If he then has 4 counters he loses the Stun Immunity he got at ante and becomes stunned. Again, he does not gain Soak 2 in that case. (Official FAQ)

A: You can just play it as written, or house-rule it to say 5 instead of 4. AUA's are intended to be a casual fun variant, much like arenas, so it's largely at the player discretion what goes. (Official FAQ)