World of Indines Wiki
Register
Don't have an account?
Sign In
Advertisement
in: Characters, Characters in War of Indines, Jefferian,
and 3 more

Cherri Seneca was a young girl from Sanghalim who was stricken with a terrible disease. When the doctors in her homeland could do nothing for her, her parents took her on a voyage south, into the wastelands of Gesselheim, where they had heard rumors of a witch who would cure any ailment for the right price. Cherri died on the voyage, but that did not prevent Hepzibah Culotre from healing her and restoring her to life once more. Cherri returned blind from her journey to the Afterworld, and the ritual that restored her soul left a tiny tear in the fabric of reality that holds the worlds together. This hole has allowed terrible secrets from beyond space and time to trickle slowly into her memory, granting her mysterious powers over the realm of dreams and minds.

Sensing an opening through which she could exert her influence into Indines, the alien warlord Oriana sent her knight, Zaamassal, to track down and capture the girl. At the same time, heroes from the Planestalkers, led by Luc Von Gott, attempted to reach Cherri first in order to prevent Oriana's plans from coming to fruition. Zaamassal managed to reach the girl first, and earn her trust by explaining her condition and telling her that his master could seal up the damaged part of her mind.

Unfortunately, Oriana's intentions for Cherri went no further than the warlord's own ends. To extract the rift from her mind, Oriana obliterated the girl's body, discarding her soul into limbo. Shocked by this callous treatment of another human who had trusted in him, Zaamassal chased after Cherri's spirit, using his own magic to give it physical form. Cherri was reincarnated as Lymn, a spirit-wolf with the power to walk between planes. Returning to Indines, Lymn joined forces with Grand Marshall Kaitlyn Van Sorrel to take control of her own fate and fight against Oriana's invasion.

In the ongoing battles against the forces of Chaos, Lymn continues to aid the Planestalkers, guiding them to new planes with her supernatural insight, and helping them to stay one step ahead of Oriana. Though wary of outside help from beyond Indines, she fights alongside new allies like Iri to maintain order and balance. On her many travels to fantastic worlds, she also searches for Zaamassal, now lost in self-imposed exile, in hopes of helping him find redemption for the mistakes of his past.

Cherri is a young girl with flowing white hair, with her eyes bandaged at all times.

Cherri is a seer and a dreamwalker, with power over the unconcious and the mind. 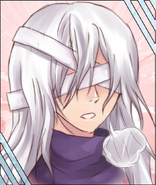 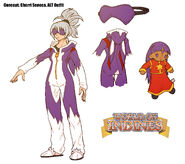 Cherri has one Insight Token.

A: The Clash still occurs. The Clash is triggered by Cherri’s unique ability, not by priority. The ‘you win priority ties’ effect will still prevent the Clash from extending if it ties. (War rulebook)