World of Indines Wiki
Register
Don't have an account?
Sign In
Advertisement
in: Characters, Characters in Devastation of Indines, Striker,
and 3 more

Clive is a Backer's Choice character included in Devastation. He was the pick of the backer who chose the "One Man, One Vote" pledge level.

In a terrible disaster a few years prior, the Melmont family's estate was consumed in a huge fire. Clive was the only survivor and was gravely injured. It was the royal historian and famous hero Luc Von Gott who built a robotic body for Clive, transferring the boy's consciousness to it and saving his life. Clive now follows Luc on his adventures, inventing new and incredible machines of his own and learning from his master about what it means to be a hero.

Clive utilizes a wide variety of gadgets and tricks in combat. His tools provide him with handy temporary bonuses, which he can leverage for utility during battle and constantly vary his play style. 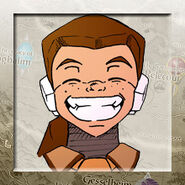 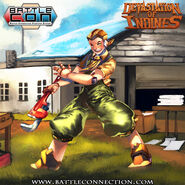 A: No. The effect goes both ways and should read "This attack does not hit if you and the opponent switched sides". (Official FAQ)