World of Indines Wiki
Register
Don't have an account?
Sign In
Advertisement
in: Characters, Characters in War of Indines, Gesselheimians,
and 3 more

A three century-old vampire who fights with lightning speed, Demitras is a servant of the Dark Overlord Rexan . Two hundred years ago, Rexan was slain by four legendary warriors, and the world was restored to light from darkness. An aristocrat and ruler of the world alongside Rexan in his glory days, Demitras is working to revive the overlord by collecting the souls of the world's strongest warriors.

Demitras dresses in formal attire, as befits a member of the nobility. His long hair is meticulously tied back.

Demitras is a skilled fencer, which he backs up with the increased speed his vampiric blood provides. 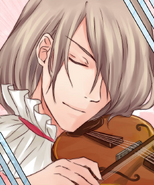