Dravil was one of the Backer's Choice characters to be potentially included in Devastation, finishing 12th out of 13 choices.  He also appears in Pixel Tactics 2.

In the distant north, beyond unexplored mountains, is an ancient land shrouded in ice. Populated entirely by elementals and cut off from other civilizations, a unique culture has sprung up within frozen cities carved into stone. Dravil is a half-elemental who has ventured south across the great mountains, and into Indines in search of adventures and stories to tell. 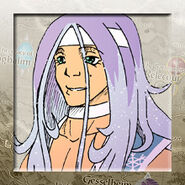 Dravil utilizes a flute to control water during battle. The ebb and flow of his attacks is regulated by the pace of the music and the changing of the tides.