Gaspar Geddon was added to Devastation of Indines as a Kickstarter stretch goal when funding reached $55,000. He is a Doppelganger from a realm called the Minus World.

NB: This background may not be final.


Gaspar Geddon is a doppelganger from a faraway and dying world. He serves the Naught, a mysterious alien deity that is said to be composed of 'all things, possibilities, and beings which never were, or which have yet to be.' 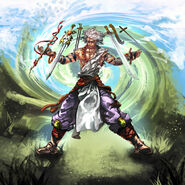 Temple of the Unseen - Gaspar´s Arena

A: They jump over standups when advancing or retreating past opposing standups. They pull opponents over themselves as if they were a standups. Do note that multiplayer movement rules apply when Clone Markers move themselves or opponents. If standup equals opponent to the opposing player remains to be shown. (Official FAQ)

A: No. Clone Markers only behave like standups when moving on their own (Dash/Drive/Burst). (Official FAQ)

A: No. The effects that return anted bases state so explicitely: Gaspar using an attack with range or power of N/A and Gordian's End of beat effect. In ever other case Gaspar's anted bases cycle with Gaspar's attack pair. (Official FAQ)

A: Bases are anted face-up and the corresponding markers are immediately placed with their declaration. It is always clear which base corresponds to which Clone Marker. (Official FAQ)

A: They go to his discard pile 1 when his finisher is removed from the game. (link )