World of Indines Wiki
Register
Don't have an account?
Sign In
Advertisement
in: Characters, Characters in Devastation of Indines, Striker,
and 4 more

Gerard Matranga was added to Devastation of Indines as a Kickstarter stretch goal when funding reached $95,000.

Gerard is the "Mercenary King" of Relecour (the Eastern nation in Indines). The country is officially run by barons who guard their fiefdoms, but wandering bandits, mercenaries, and all other manner of thugs rule the wild lands between established cities. War is an important business for these bandits, and while the small wars between barons and petty robbery are enough to keep the coffers full, international wars pose an even greater opportunity for them–an opportunity Gerard aspires to take advantage of, with the resurrection of the Overlord Rexan and the impending war that he has incited Alexian and the majority of the Relecan Barony to engage in.

Gerard’s Fortress is known as Blackspire, a massive and ancient tower forged of charred steel that twists ominously up to the sky. Previously overrun with aberrant creatures, the mercenaries under Gerard’s command slaughtered them all where even organized armies had failed, and made Blackspire their own. Still, the lower levels of Blackspire remain sealed, and the secrets beneath it, and the other spires of Indines, remain unknown even to Gerard, but he hopes to acquire the power necessary to fight through the horrors within its vaults and find whatever treasures lay buried there.

Hearing rumors of the resurrection of the Overlord Rexan, Gerard sends his close confidant, Antine Frass, to spread whispers of war and incite fear among the people of Jeffreys and Relecour regarding their southern neighbors. At the same time, Gerard himself travels to Gesselheim, to confront the overlord and ransom the entire nation. Set against caving to Gerard's demands, Rexan prepares himself for war and diplomacy as a new conflict prepares to sweep his nation.

The fortress of Blackspire has stood since ancient times, before even the war between the gods and the dragons. Sealed within its depths is one of the great vaults. With the keys to these vaults only recently discovered, Gerard sets off alongside his company to capture the vault keys and claim whatever treasures lie within the vaults for himself.

As Gerard's military successes and wealth grow, he sets his sights upon becoming the King of Relecour, in deed rather than merely in name. With his schemes in place, and the barons of Relecour growing ever weaker in their holdings and military power, the time will soon come for the rise of a new kingdom in the World of Indines. The coup is the main theme of the new game Ballistic Reign.

Gerard´s Band of Brigands is formed by:

Work in progress art by Nokomento 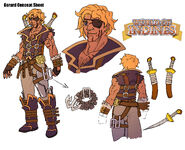 A: No. This is only possible with Gerard's Alternate Unique Ability. (Official FAQ)