Hikaru is one of the iconic main characters of the cast and features prominently in most of Indines games. He usually is an introductory level character for new players to learn the concepts of the game and as such features in the iOS game Battlecon being the character that learns the game rules in the tutorial. In nearly all his appearences, Hikaru has the most straightforward playing style among all characters.

Hikaru is a free-spirited seeker of adventure who travels the world in search of new challenges and experiences. Treasure and fame hold no value for him. Instead, he searches for sights unseen and to test the limits of his own skills. He is good-natured and with a strong sense of personal justice, though he sometimes lacks patience and often lacks due caution. He throws himself body and spirit into whatever the task at hand is, without looking back or hesitating.

As a student of geomancy--the magic of elements--who has some elemental heritage of his own, Hikaru is a fighter who utilizes the power of the world around him to aid his strength in battle. After graduating from university, Hikaru traveled around Indines and undertook many different self-directed adventures in his quest to discover his own limits and perfect an original martial arts style.

During the Plot of BattleCON: War[]

During the timeline of BattleCON: War, Hikaru joins his friend Khadath on a mission to find Cherri Seneca, a girl who could be the key to unleashing an alien invasion upon Indines if she is not saved in time. While Khadath is mainly interested in the mission itself, Hikaru sees the adventure as an opportunity to travel and fight alongside friends.

In order to help stand against the many threats that face Indines, and to hopefully do a little good, Hikaru teams up with a newly met friend, Rukyuk Amberdeen, and sets up the Champions of Indines Mercenary company. The Champions are dedicated to fighting powerful monsters and diffusing international threats, and are one of the few mercenary companies in Indines that do not engage in international conflicts.

After the events in War and his adventures with the Champions, Hikaru decides that he does not wish to involve himself in the international war that might be coming to Indines. Instead, he joins up with an explorer's company, the Sun Chaser's Guild and embarks on a high-seas adventure that eventually leads him to the unknown continent across the great eastern sea. What adventures he finds on that voyage and on his return home are yet to be revealed.

1. He studied Geomancy at Argent University. While his academics are mediocre, his practical skills were rated exceptionally.

2. He is a half-elemental (Light elemental, on his father’s side). He has a younger half-sister, Sami Rekar (they have the same mother) who attends Argent as well.

3. He is developing his own martial arts style, the Way of the Four Fists, based on the four elements. Each element focuses on a different style of striking.

4. He is good friends with Pendros Schalla, an upperclassman who left Argent in Hikaru’s second year. Pendros's travels across Indines were an inspiration for Hikaru to become an adventurer as well.

5. He has a strong sense of personal justice, and can’t stand by while evil is being done.

6. Because of his light-elemental heritage, he wakes promptly and energetically at sunrise, and becomes tired very quickly after dusk. His training can help to suppress this fatigue.

7. He almost joined a mercenary company, the Lost Sons of Relecour, but adventuring with Khadath got in the way of that career.

8. After his adventures in BattleCON: War, he helps Rukyuk to found the Champions of Indines Mercenary Company.

9. He does not get along well with his stepfather, Karlton Rekar, so he avoids returning home whenever possible.

10. He met Khadath during his first year at Argent, and the two have been close friends ever since. Between Khadath's dour personality and Hikaru's carefree disposition, the two form natural foils that balance one another out.

Hikaru has short sandy hair, and dresses in a more modern fashion than many of the cast, choosing to wear a jacket and trousers.

Hikaru is a geomancer who can manipulate the elements to infuse his attacks with new powers. Able to extend and shorten his range with water, increase his power with fire, or soak damage with a shield of earth, Hikaru has options for every situation.

Hikaru is part light elemental, and this nature makes him more adept at channeling the geomantic elements that fuel his attacks. He can transform into a being of pure light for a short time, but rarely uses this power, since fists of light cannot punch as hard as flesh and bone ones. 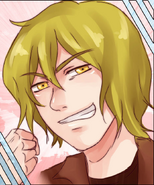 A: Nothing happens. Active player will not change during the Start of Beat phase.