Jasper was one of the Backer's Choice characters to be potentially included in Devastation during the Kickstarter campaign, but failed to be elected by the community.

He features in Pixel Tactics 2 and as a supporter in Argent: The Consortium

Rasps are natives of the Plane of Shadows, a relatively near plane filled with darkness and nightmares. Jasper has crossed the planes to visit Indines and learn about culture and magic, hoping that he can bridge the gaps of tension and prejudice that exist between Indines and his own world.

Jasper is capable of controlling shadows and draining life energy from others. He is a well-rounded fighter that focuses on reducing opponents' capabilities and increasing his own to gain the upper hand. 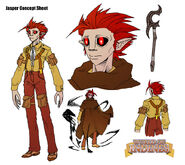 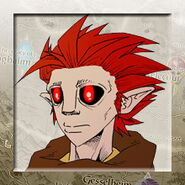