First appeared in War of Indines as a familiar to the Water Mystic Tatsumi Nuoc. Juto appears in Devastation Extended Edition as a character in his own right and the mascot character for War of Indines. Juto also features in Pixel Tactics.

After being saved from near death by Tatsumi Nuoc, Juto was transformed into a mystical familiar.

Juto is a small panda cub - his body markings are blue instead of the classic black.

As one of the mascots, Juto can dress as one of the War of Indines characters, wich allowes him to perform attacks inspired on those characters. 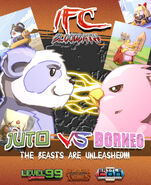 Promotional Artwork for the War and Devastation Mascots. 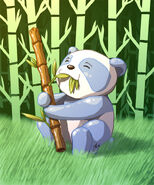