Kaitlyn van Sorrel was added to Devastation of Indines as a Kickstarter stretch goal when funding reached $35,000.

Kaitlyn hails from the Theocracy of Sanghalim. In her youth, she joined the Sanghalese Imperial Academy and studied Planar Science there. After this point, she enlisted in the military and attained a considerable officer rank in service as a military scientist.

Changes came for Kaitlyn when her only daughter, Rixia, was born. Having a child outside of marriage is a strict taboo in the theocratic empire. Rather than obey the law and give her daughter up to the temples for adoption, Kaitlyn left the country. Resigning her military commission and heading east to Relecour, she joined Argent University as an associate professor. With the university's resources at her disposal, Kaitlyn proved to be a natural genius of planar science, and her research earned her international prestige during her university days.

Military training and rigid upbringing left Kaitlyn with no patience for university politics or the easygoing lifestyle of a professor. When funding was cut for a number of her critical projects, rather than lobby with the university, she contacted the Planestalkers and offered them her confidential university research in exchange for an officer's commission--an offer they quickly accepted.

After a few years of service, Kaitlyn was named Lieutenant Marshal, and eventually succeeded Grand Marshal Horace Ans-Van, another Sanghalese scientist, as the leader of the Planestalkers. As the gatekeeper who holds the safety of Indines in her hands, she prepares any resource, soldier, or advantage she can get her hands on to stand against the Alien Warlord Oriana, as well as the myriad other horrors waiting beyond the planar boundary. 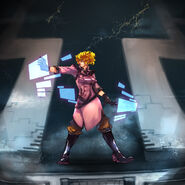 A: When Kaitlyn is being moved, she has to declare if she is going to ignore all of her wormholes or not preemptively. Only after that do opponents declare their movement decision. (Official FAQ)