World of Indines Wiki
Register
Don't have an account?
Sign In
Advertisement
in: Characters in Devastation of Indines, Characters, Striker,
and 2 more

Three further characters and one boss were added, to be created by specific backers of the kickstarter campaign.  - Iaxus the Shattered, Endrbyt and Kajia.

Whatever your motives for fighting, we're all a part of this world, and we must all stand together against what comes to destroy it. Everything is at stake-your land, your glory, your freedom, and your lives. Who will stand with me and fight back against Devestation?

Husks are undead dryads –those who choose to outlive the ancient trees that give them life. The existence of a husk is a cursed one–they are seen as harbingers of disease, death, and famine across the land. Shunned by society and the world, many of the husks in Indines have banded together to form cults in the service of the Great Disasters–creatures born of calamity and destruction.

In the first Centennial Wars, these cults came to the aid of the Southern Empire in their march north, and prepared a great curse to spoil the forests of Jeffreys , the central nation of Indines. Kajia, an accomplished druidess, stood with her own life tree in the way of this curse, taking the brunt of its dark power upon herself. The force of the curse blasted her life tree, and became infused permanently into her body, turning her into a husk as well.

Kajia determined to fight the husk cults as long as her new half-life would allow, and aided the side of her nation from the shadows. Even to this day, there are rumors of a dark spirit of the forest that aids travelers and defends the forest from those who would harm it. Kajia has seen the coming of Havoc and been called to join the husks who serve it in her dreams. Now her task of stopping them has become ever-more urgent. 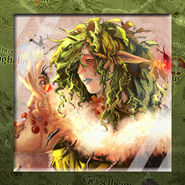 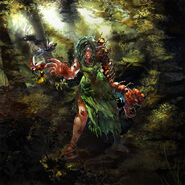 A: No. Both regular and Alternate Unique Ability can give out an infinite amount of Insect Counters. (Official FAQ)

A: When the Finisher is removed from the game, the Insect Counters go into the opponent’s discard pile 1. (link)