World of Indines Wiki
Register
Don't have an account?
Sign In
Advertisement
in: Characters, Characters in War of Indines, Argent University,
and 4 more

First appeared in War of Indines

Kallistar is a half-elemental touched by the power of fire. As a resident of Kor Karoli, the city where Argent University is located, she spent most of her life looking forward to becoming a wizard and mastering the arts of Sorcery at Argent. When she came of age, her wish was granted, and she became a fully-fledge student in the department of Sorcery.

One of the few students to stick through (and survive) the entirety of Vice Dean Kanhamme's Evocation program, Kallistar became of special interest to Dean Larimore Burman, the world's foremost authority on Warmagic. Searching for a successor who would use the power of warmagic for peace, rather than their own gain, Burman selected Kallistar as his personal apprentice.

Having just completed her graduate program, Dean Burman gives Kallistar one final project–to use the Warmagic that she has learned in practice. Uncertain of how she should go about finding a war to participate in, a distraction came to Kallistar in the form of her good friend Magdelina Larington, who asked Kallistar to accompany her on a dangerous mission to prevent the resurrection of the Overlord Rexan.

Together with Magdelina and Vanaah, Kallistar infiltrated Rexan's fortress and confronted him. Kallistar's duel with Heketch was interrupted when Rexan recognized her and addressed her as "Mandala", the name of one of her ancestors who had served as his general three centuries before. Stunned by the recognition of her great grandmother's name, Kallistar was confronted by the realization that she was fighting to undermine her own ancestral homeland and was forced to consider why her ancestor would join forces with the Overlord.

When she heard of Magdelina's defection to join forces with the overlord, Kallistar left Gesselheim to reexamine her own beliefs and to decide what ends she wanted to use her powers towards.

Hearing rumors of war mounting between the northern nations and the newly rebuilt Empire of Gesselheim, Kallistar has traveled south to seek out the Overlord once more, offering her services as a warmage in hopes of preventing war with the North.

A fiery-haired woman wearing reds and oranges. In elemental form she appears wreathed in flames.

Kallistar has control over fire and can combust her own body, engulfing herself in flames. 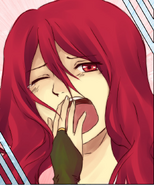 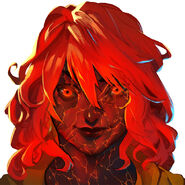