World of Indines Wiki
Register
Don't have an account?
Sign In
Advertisement
in: Characters, Characters in Pixel Tactics, Non-Playable Characters,
and 5 more

Kavri is a heavily featured character in the Indines universe, but being a non-combatant healer she has never been playable in BattleCon. She appears as a Striker, and as a unit in Pixel Tactics, as well as a playable champion in Champions of Indines and a supporter in the upcoming Argent: The Consortium.

A student of Argent University at Relecour. She studies under Dean Mikhail Isen in the Divinity department. She is friends with Kallistar, Khadath and Hikaru, and usually accompanies them in their journeys. 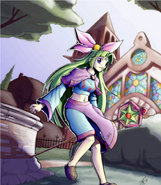