First featured in War of Indines , Kehrolyn is the homunculus daughter of Doctor Ross, and as such the one to set in motion one of the major plotlines in the World of Indines .

The magisters of Willat control all Technomagical research within their borders, and place strict bans on sciences that can create new life. The eminent Doctor Aaron Ross, after losing his titles and property for defying these sanctions, retreated into the wilderness of Willat and opened a secret laboratory. With the help of his assistant, Lixis Ran Kanda, he created two exceptionally powerful Homunculi, Kehrolyn and August, using forbidden techniques in bio-alchemy.

These two homunculi possessed the power to use Alchemy for themselves and alter their own physical appearances and capabilities, effectively upgrading themselves with any kind of natural weapon or armor they want. Unlike August, Kehrolyn has a built-in limiter, which prevents her from deviating too far from her default form. August, though far more powerful than Kehrolyn, became more and more unstable (both mentally and physically) during her development, and would have been decommissioned if not for the disaster that befell the laboratory.

Aaron Ross's laboratory was discovered by the Magisters and destroyed in a sudden, deadly raid. Ross and August perished in the raid, but not before August managed to destroy nearly an entire battalion of clockwork soldiers single handedly. Fearing that Kehrolyn may be just as dangerous as her sister, the magisters have sent Rukyuk on a mission to track down Kehrolyn and Lixis, destroying the former, and bringing the latter back to Willat in custody.

Rukyuk eventually catches up to Kehrolyn, but is defeated by her. Despite Lixis's advice, she spares Rukyuk's life, telling him that she's more than just a monster or a trophy.

After her adventures in BattleCON: War, Kehrolyn joins Rukyuk's mercenary company, the Champions of Indines, in order to try and do some good in the world with her power. Though she still has some trouble blending in to human society, she is carving out a niche for herself, making friends, and learning about what it means to be a part of society.

Most homunculi in Indines are little more than organic machines, serving at various tasks for their masters and entirely without self-awareness. Thus, Kehrolyn remains a bit lonely in her uniqueness and continues to seek out an identity of her own.

Kehrolyn has very long white hair and wears a form-fitting red outfit with white patterning. She can mutate her body into strange and inhuman shapes.

She has the ability to shapeshift into different forms and shapes. 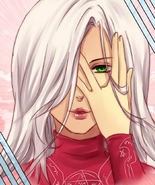