World of Indines Wiki
Register
Don't have an account?
Sign In
Advertisement
in: Characters, Characters in War of Indines, Argent University,
and 4 more

First appeared in War of Indines

A prince among his tribal people, Khadath cast off his wealth and status to become a scholar, and study Planar Magic at the distant Argent University. Now, a plague has stricken his people, and he is one of the few who can save them. Armed with his ancestral sword and his sharp wits, Khadath is searching for a cure to save his people and himself, before it is too late…

Khadath has short blue hair and wears a monocle. He favours a long travelling coat over britches and tunic. His key earring is actually the device that controls his gates.

When travelling dangerous planes like the Minus World or the Realm of Chaos, Khadath wears power armor to protect himself from the denizens.

Khadath has powers of spatial manipulation, and can lay gravity wells that suck opponents in, restricting their movement. 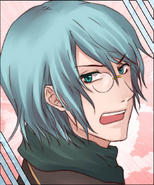 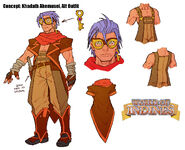 Khadath has one Gate Trap Marker.