World of Indines Wiki
Register
Don't have an account?
Sign In
Advertisement
in: Characters, Guest Characters, Characters in Devastation of Indines, Striker

Guest character in Devastation of Indines.

Legacy is non-canonical. He is a guest character from the "Sentinels of the Multiverse" board game. He comes with four Striker cards to represent his superhero team, the Freedom Five - Wraith, Tachyon, Absolute Zero and Bunker. The following information is taken from the Sentinels website:

In 1759, Joseph William Parsons was born in Boston.  By 1772, he would be apprenticed to master silversmith and revolutionary, Paul Revere.  Joseph’s father had been a local hero for his efforts in the French and Indian war, but he did not survive said war.  The newly widowed Mrs. Parsons became despondent in her grieving, retreating from society.  Overwhelmed by the loss of her husband and by the responsibilities of being such a young, single mother, she eventually took her own life.  By that time Joseph was already living with Paul Revere, who had fought alongside Joseph’s father and returned from the war with a promise to care for young Joseph.

Time went by, and at the age of 13, Joseph was clearly his father’s son.  A youth spent in  hard work had molded him into a strapping young man.  He was determined, quick to smile, and even quicker to lend a helping hand whenever and wherever needed.  He enjoyed working in the shop with Mr. Revere, learning the trade of the silversmith in between his studies.  Rising tensions with the British were on everyone’s mind, and Paul Revere became a member of the Sons of Liberty.  Joseph was more interested in learning and working than in being a revolutionary, but he still followed his mentor’s actions, staying aware of the political state of the colonies.

While on one of his frequent trips to the harbor, 16-year-old Joseph experienced a bizarre phenomenon.  As he walked along the Charles River, the sudden reverberation buzzing along his skull almost drove him to his knees.  Gasping, he fought the nausea and shook his head to clear the ringing in his ears and the tears from his eyes.  Joseph looked around, trying to discern what was happening to him.  Through the evening’s fog, he could see a dim light bobbing across the dark water.  As he focused on it, the buzzing in his head increased, but instead of hurting him, the sensation galvanized him into action.  Climbing a nearby watch tower, he fought the effect of the increasing droning to stare out across the river.  The light was a lantern on a boat - several boats actually.  Boats carrying British soldiers!  Upon identifying the this as a potential threat, the vibrations in Joseph’s head ceased with a snap, leaving him breathless in realization.  The British troops, previously stationed in Boston as a result of the Boston Tea Party, were crossing the Charles River and heading towards Lexington.  Even more pressing, Joesph was the only one who knew about this.  He raced to the Old North Church to inform Robert Newman of the troop movement.  Together, they mounted the stairs to the steeple, holding two lanterns high.  Paul Revere saw the signal and set off on his famous midnight ride warning the patriots along the way that the British were coming.

Joseph never told anyone about the buzzing which had assaulted him that night, warning him of the impending danger.  However, the feeling did return many times throughout the rest of his life.  He never ignored its warnings, and managed to avoid much danger and prevent many accidents and disasters as a result.  In appreciation for Joseph’s help on that fateful night, Paul Revere crafted a simple but stout silver ring for Joseph, engraved with the phrase, “Furthering your Father’s Legacy.”

After establishing his own silversmith shop in Pennsylvania, Joseph married, and a year later Paul Nathaniel Parsons was born, named after Joseph’s adopted father and mentor.  By the age of 12, young Paul began to exhibit an uncanny sense of danger, but also was more keen-eyed and fleet of foot than any of his peers.  Joseph realized that his son had not only inherited his senses, but also was more capable than the average boy, and began training him, not just in the ways of silversmithing, but in the ways of liberty, of justice, and of defending the common man.

Eventually, Paul grew up and led his fellow man in progress and the pursuit of freedom and justice. His son, Paul, inherited his abilities, furthering them with the addition of strength uncommon in all but the stoutest of men. The line of Paul Parsons continued on, each more powerful than the last, each passing on the “Legacy Ring.” In the late 1800s, the Parsons moved to the Chicago area, and in the early 1900s the first member of the family line developed flight. That Paul Parsons took on the mantle of “Legacy” and became the world’s first superhero.

A Paul Parsons has fought in every major war, with the notable exception of the Vietnam War. Though Legacy has always been an American hero and patriotism runs strongly in the Parsons family, this has not deterred Legacy from appearing to defend liberty and justice all over the world.

The current Legacy, born April 18th, 1973 in Chicago Illinois, has spent the bulk of his heroic career leading the Freedom Five and thwarting the machinations of the villainous Baron Blade, among other threats to freedom and the common man, everywhere. At home, Paul Parsons the 8th's daughter has just turned 18, and Pauline Felicia Parsons has developed new powers of her own. 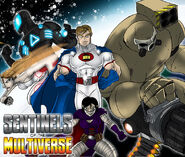 The Wraith (aka Maia Adrianna Montgomery) is a skilled martial artist and freedom fighter, hailing from Rook City. Her real world personal is the CEO of Montgomery Industries.

Tachyon (aka Dr. Meredith Stinson) is an accomplished scientist and the fastest woman on Earth.

Absolute Zero (aka Ryan Frost) is unable to live outside his cryo-suit due to an accident in a laboratory. He uses his suit and powers over cold to fight crime.

Bunker (aka Tyler Vance) is a strategic and mechanical genius and the first mechanized soldier in the US army. Piloting the Personal Armament Exo-Chassis YS-1300t suit, he is the second in command of the Freedom Five.

The rest of the Freedom Five are included with Legacy's Promo kit as Strikers.