World of Indines Wiki
Register
Don't have an account?
Sign In
Advertisement
in: Characters, Characters in Devastation of Indines, Gesselheimians,
and 5 more

First featured in Devastation of Indines.

A native of Gesselheim, Lesandra's family moved north to Relecour to escape the poverty and lawlessness of their homeland. At the age of 10, Lesandra summoned and bound her first outsider, and was granted an apprenticeship at Argent University. Working for years as an apprentice librarian and custodian under Vice Dean Byron Krane, Lesandra's skill grew considerably over the years, and she was eventually enrolled in the college, where she graduated with exceptional marks and continues her study in the graduate program. For her graduate studies, Lesandra is seeking out Hepzibah Culotre, the legendary vivimancer who managed to perfect a spell of true resurrection. However, as the Gesselhemian situation grows more dire, Lesandra becomes tangled in more than she bargained for, being forced to choose sides in a war between her homeland and her new friends in Relecour. Personality: Melancholic, Condescending, Brooding

Personal Possessions: Her contract with Borneo

Lesandra wears short dresses over practical clothes, with messy red hair and a tattoo of a star on her left cheek.  Lesandra always wanted a raven familiar, to match her dark, brooding superficial appearance. Borneo seems to have an intuitive understanding of her deeper feelings though.

Lesandra has the ability to convoke various summons from other planes: 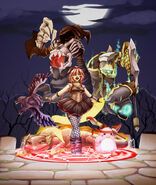 A: No. Her familiar will stick around until it is banished, anted or a new is summoned. (Official FAQ)

A: Yes. Her summoning makes her lose life (not spend life), and losing life at 1 health has no effect. (Unofficial thread)