World of Indines Wiki
Register
Don't have an account?
Sign In
Advertisement
in: Characters, Characters in War of Indines, Jefferian,
and 3 more

The western desert of Sanghalim grows several miles every year, slowly eating away at the lush central forests of Jeffreys . Seeing the expansion of the desert would inevitably destroy her own and her sisters' home, Lixis resolved to learn the science of biomancy, in hopes of creating a way to restore the blighted brush lands to life and fight the desert. Reaching the northern nation of Willat , the capital of Technomagickal and alchemical research in the world, Lixis joined the laboratories of famed alchemist Aaron Ross and showed a natural aptitude for life sciences. There she set about researching ways to improve and empower life. After Ross's research was deemed heretical and condemned by the magisters of Willat, Lixis fled with Ross's greatest creation, Kehrolyn, and his research notes. She is close to finding the secret of restoring the desert-swept lands to life, and only a few clues remain to be found...

Lixis, as a dryad , has an almost elven look to her, but the flowers bedecking her outfit and her long green hair bely her true nature.

Lixis is a powerful alchemist and master of the science of biomancy. 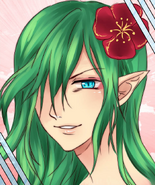 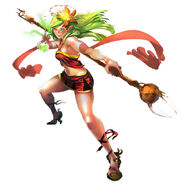 A: No. Kehrolyn’s current form is a second Style, not a stat bonus. (War rulebook)

A: He stays where he is. The passive movement-preventing effect of Lance doesn’t activate until it has been turned face-up. (War rulebook)

A: They must move forward until they are prevented from doing so by Lance’s effect, then stop.

A: Both Mikhail and Rukyuk only care that the token was anted. The Ammo Token would not grant its benefit but Rukyuk would be able to hit. In the same way Mikhail would apply his style. (Official FAQ)