World of Indines Wiki
Register
Don't have an account?
Sign In
Advertisement
in: Characters, Characters in War of Indines, Four Heroes,
and 4 more

Luc was born in Willat in the year 672, where he worked as a mechanic alongside fellow scientist Bors Vilnar. During his time, he did a great deal of research in the field of Chronomancy, and managed to build some of the first time-travel devices in Indines.

Around the year 700, the Centennial War began between Gesselheim and the other nations of Indines. Luc banded together with three heroes from the other nations to stop Rexan. At his side were Servi of Relecour, Avenlia of Jeffreys, and Delgado of Sanghalim. Aided by the betrayal of Byron Krane, a trusted advisor to the overlord, the four heroes infiltrated Rexan's fortress in Rubara and killed him. Without Rexan's leadership, the nation of Gesselheim fell apart, and the Centennial Wars ended.

Luc returned to Willat after his exploits to continue his research. Over time, he became more and more involved with the Planebinders, a precursor to the modern Planestalkers, which he helped to build.

Luc discovered a dire threat to the future in the form of Cherri Seneca, and came to the present time in Indines in order to help the Planestalkers prevent her from falling into Oriana's clutches. Along with Khadath and Hikaru, he set out on a mission to keep Cherri safe–one which ultimately failed.

Together with the help of Ezikiol Zook, Luc managed to save the life of his apprentice, Clive Melmont, in a deadly fire that claimed the lives of both of Clive's parents and his brother, Lastar. Together, Clive and Luc fight alongside the other Planestalkers to drive Oriana out of Indines.

After failing to thwart Oriana, Luc remained in the present to continue his work alongside the modern planestalkers. Much as changed in his homeland of Willat over the past three hundred years, and his old friend Bors Vilnar has become a different person than Luc remembers. He has resolved to meet the new magisters of Willat, and try to prevent the senseless calamity he sees them bringing down upon the rest of the continent.

Luc is a middle-aged man with short hair and a moustache, who dresses in a very steampunk-esque manner.

Luc has the power to manipulate time to his will - speeding it, slowing it or sometimes even stopping it altogether. 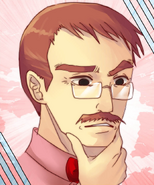