World of Indines Wiki
Register
Don't have an account?
Sign In
Advertisement
in: Characters, Characters in War of Indines, Jefferian,
and 5 more

A spiritualist and descendant of the Legendary Solar Saint Avenlia, Magdelina uses the rituals of a battle priestess to summon forth her ancestor's ghost and channel its strength as her own. As her ties to Avenlia grow stronger, she transforms into an unstoppable force of legendary might.

In War of Indines, Magdelina went on a crusade with two friends, intent on stopping the resurrection of the Overlord Rexan. Magdelina and her friends Vanaah and Kallistar stormed the overlord's fortress, but were too late to stop his resurrection. Magdelina alone made it to the throne room to confront Rexan. When she reached the final chamber in the fortress, something came over her, taking control of her body unwillingly and forcing her to fight.

Ultimately Magdelina was defeated, and awoke from her trance with a vivid and frightening memory of how she had been controlled. Rexan explained to her that Avenlia's deep hatred had driven her back to slay him once more–at Magdelina's own peril. The overlord offered to teach her to truly control the spirits she communed with, and Magdelina accepted.

With a mastery of both light and dark magic, Magdelina is no longer a puppet to be used by her spirits, but a master who commands and directs them to fight alongside her. She now acts as a guardian and guide to the spirits of Indines, fighting to protect the sanctity of the living from the dead, and vice-versa.

Magdelina is a young woman with long white hair which she keeps in two long pigtails.

Magdelina can channel the spirit of Saint Avenlia through her own body, giving her the speed and strength of the legendary hero.

Once awakened as Twilight Magdelina she can command the spirits of powerful ancient heroes.

Twilight Magdelina, a boss in Devastation. 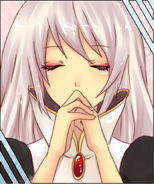 Magdelina controls 4 spirits, which may be Bound or Unbound. When Bound, Magdelina has additional powers. When Unbound, they deploy to the board as markers and perform an attack each phase.