Indines is a world closely tied to the dimensions around it. When a portal opened to the Dark World three centuries ago, Heketch fell through it and entered Indines from the Dark World—a nightmare given human form that thrives on the pains and fears of the living. The Overlord Rexan found Heketch and bade him to only kill at the overlord’s behest, naming him Imperial Assassin.

Since that time, he has become a name whispered in fear across the nations. In the centennial wars, he fought beside Rexan to conquer the world, and earned the title of Regicide for slaying more kings than any other soldier in history. Notable among his victims is the Solar Saint Avenlia, ancestor and spirit guide of Magdelina Larington, as well as King Alexian XXIV.

Through the years, Heketch has become somewhat of a bogeyman in the legends of Indines, and though he hasn't been active for three centuries at the start of the story, his name is still used to frighten children, and he has become more of a legend than a real figure in history.

As Hepzibah prepared her ritual to resurrect Lord Rexan, Heketch was awakened to guard Rubara Keep and dispatch and meddlers who would interfere with the newly risen overlord. Ecstatic with the prospect of reuniting with his former master, Heketch cut down and captured a number of enemies of Gesselheim, most notably Seth Cremmul, who was later pardoned by the overlord and sent home to his own country.

Uninterested in the rebuilding of Gesselheim, and without any specific missions to carry out, Overlord Rexan has sent Heketch to watch over Baenvier, the captain of the elite Lesionaires, as he searches for more of the mysterious lost vault keys. Though Baenvier is capable of handling himself in a fair fight, Heketch follows, unseen and unknown to the soldier, watching his back and ready to join any fight if the need arises.

Heketch is a non-human with piercing red eyes and a wide mouth filled with razor-sharp fangs. He dresses in dark leathers and a long red cloak.

Heketch is a skilled assassin, disappearing into the night only to strike when least expected. 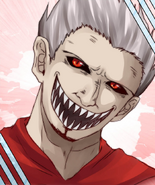 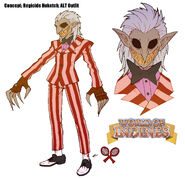 Heketch has one Dark Force Token.

Retrieved from "https://indines.fandom.com/wiki/Regicide_Heketch?oldid=9011"
Community content is available under CC-BY-SA unless otherwise noted.