World of Indines Wiki
Register
Don't have an account?
Sign In
Advertisement
in: Characters, Characters in War of Indines, Willati,
and 5 more

Hailing from the technologically advanced nation of Willat, Rukyuk (or "Rook", on the streets) is a bounty hunter who travels the world in search of wanted criminals or beasts deemed too dangerous to live. Despite his profession, Rukyuk's success on missions in his homeland have kept a great number of people safe and have made him into somewhat of a hero.

At the beginning of the story, Rukyuk is commissioned by magister Bors Vilnar to track down Lixis Ran Kanda and Kehrolyn Ross, who were fleeing the destruction of Aaron Ross’s illegal research laboratory. After witnessing first-hand the power of Ross’s other homunculus, August, Rukyuk was intent on destroying Kehrolyn for the safety of his nation and the world.

Now wanted in his own home country, Rukyuk fled to Relecour, where he established a small, specialized mercenary company, the Champions of Indines, to fight monsters and dangerous criminals across the world. Joined by many of the strongest heroes from across the land, the Champions have helped the nations of Indines to maintain peace and safety within their own borders, as well as taking on some of the most deadly beasts ever known.

As threats to the world grow in the form of extraplanar invasion, the Champions of Indines stand ready to defend their world from Oriana and her alien monstrosities. Though they come from many different backgrounds and beliefs, under the leadership of Rukyuk, they have set aside their differences to protect their home from the many threats that besiege it.

Rukyuk has the pointed ears that signify his elven heritage, and wears leathers that offer him fast movement. He uses a special Willati rangefinding eyeglass over one eye.

Rukyuk is an expert marksman and gunner. Unlike many Willati, however, Rukyuk cannot use magic, so despite his fame, he spends as much time abroad as he can. 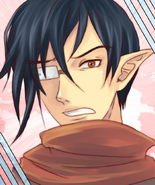