Saint Mikhail Isen is a character that was added to Devastation of Indines as a Kickstarter stretch goal once funding reached $45,000.

The Virian race hails from the Celestial Plane, which is filled with creatures who subsist on the prayers, faith, and dreams of individuals in Indines. Beings from this realm are sometimes sent across the planes to perform specific tasks. Mikhail is a hunter sent to eliminate those who violate the sanctity of death and to destroy those who are brought back from the other side.

Hepzibah's resurrection of the Overlord Rexan has not gone overlooked, and now forces from beyond Indines have sent Mikhail to hunt her. If he succeeds, he will send both her and those she has resurrected back to the Afterworld. 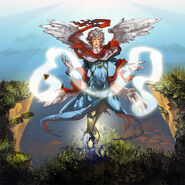 A: Yes, it does. But make sure that Mikhail is indeed at range 3 or greater from your opponent's perspective. [K]arin uses Coordinated and [M]ikhail moves into [J]ager's space with Sacred: oKoJMoo - no damage; oKoMJoo - 2 damage. Do note that Jager prevents Mikhail from entering his space regardless. (Official FAQ)