Seth is an imperial oracle from the Theocracy of Sanghalim in the west. Sanghalim is a vast desert empire led by the voice of its living deity, Kallimerina, the Avatar of Sanghalia. Serving the avatar are a circle of elite oracles, paladins, and priests. Seth is counted among these. On the orders of Kallimerina, he has set out to the blasted lands of the south, to aid Magdelina Larington in stopping the resurrection of the Dark Overlord Rexan.

Seth has long dark hair and dresses in deep blues and blacks. His eyes glow green when he uses his powers.

Seth has the powers of an oracle, allowing him to forsee the future in short bursts. 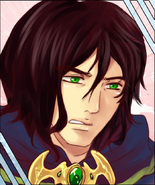 ​A: Yes. This is especially important for Candenza, who may want to ante for Stun Immunity to stop your Omen effect from triggering. (War rulebook)