World of Indines Wiki
Register
Don't have an account?
Sign In
Advertisement
in: Characters, Characters in Devastation of Indines, Daredevil,
and 6 more

First featured in Devastation of Indines, Shekhtur Lenmorre is a young thief bound to a cursed artifact, determined to use her power for good.

Shekhtur was a young thief in the western desert nation of Sanghalim who employed herself by stealing high-value items by request of foreign buyers. All that changed when she took on a contract to break into the Imperial  Reliquary and steal a trinket known as Malephaise’s Claw. The cursed relic bound itself to her. Feeding upon anger and bloodlust, it provides great power to Shekhtur if she allows it.

Unwilling to let the claw control her, she has set off to the East in search of the client who requested it, an ancient wizard named Byron Krane , in the hope that he can free her of its curse. As she sets off on her journey, Shekhtur has resolved to use her newfound power for good, rather than to let it control her. Joining forces with the monster hunter Joal Kalmor , she embarks on the  biggest adventure of her lifetime.

A young woman in a flowing red dress, she wields a distinctive magical gauntlet on her left hand.

Shekhtur is nimble and agile, and skilled at infiltration from her previous past as a thief. The "Claw of Malephaise" allows her to obtain increased bursts of power and increases her senses and reaction times above human capabilities at the cost of a heavy strain on her body and soul. 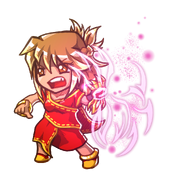