As the sole survivor of a colossal tsunami that destroyed her island home of Condao, Tatsumi inherited the staff of Nuoc and the ancestral burden of protecting the seas from disaster. When she saved Juto from near death using the staff's powerful magic, the diminutive bear was transformed into a mystical familiar bonded with Tatsumi's very soul. Having learned that the disaster was not natural--but instead caused by the negligence and greed of the Willati in their quest to discover new energy sources, Tatsumi and Juto have set off on a journey to punish those responsible for their loss, as well as to ensure that the same fate does not befall any other.

Tatsumi has long dark hair, which she keeps in two loops and one long flowing train. She wears a blue east asian style dress.

Tatsumi has powers over water. 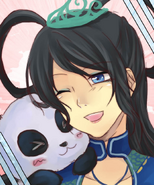 Tatsumi has a Juto marker and 4 Juto counters.

A: Your current zone is always applied instantaneously, so you could start in a high priority zone, then switch during the attack to take advantage of the high power zone. (War rulebook)