A paladin in the service of the god-empress Kallimerina , by day Vanaah is a holy warrior with an iron will and unbending faith. She serves Sanghalia , the goddess of life and water, and so sees herself as a purifying element--cutting out only the irredeemable parts from the world. By night, she serves the goddess of death - Djare - by hunting down monsters and villains.

Vanaah has joined Magdelina Larington and Kallistar Flarechild on a quest to prevent the resurrection of the Dark Overlord Rexan and a relapse into the dark days of the Centennial Wars.

Vanaah dresses in gear appropriate to the deserts she hails from, and carries a large, deadly-looking scythe.

Vanaah is also a member of a shadow cult that serves the goddess of death, and wears dark clothes with a mask by night.

Vanaah can channel the power of her goddess into her strikes, making her a deadly foe.

Each of the gods has a mortal avatar, and Vanaah is the avatar of Djare, the death goddess. When she uses her Divine Rush, she channels Djare's power to strike with supernatural speed and force. Her 'Death Walks' fully transforms her into the avatar of Djare. 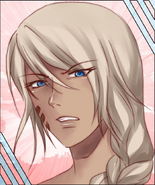 Vanaah has one Divine Rush token.

A: It goes into her discard pile 1 with whatever attack was already there, and cycles around as normal. (link)