Victor Ramos is non-canonical. He is a guest character from the wargame "Malifaux" by Wyrd Miniatures. Ramos is the head of the Arcanist faction. 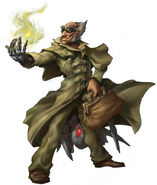 Ramos is a sorcerer and inventor who uses mechanical constructs of his own design as part of his combat style.

Ramos' life varies by the number of players he is up against. He has permanent Stun Guard 1 for each fighter in the game.

Atlas's level is based on the life Ramos has lost.

Atlas acts just like another standup on Ramos's team, and can intercept attacks for his master like a teammate. Once Atlas is stunned during a round, he can no longer do this.

Victor Ramos and Atlas's attack cards are divided in half. The Number field below is just a convient method of differitating individual cards.