World of Indines Wiki
Register
Don't have an account?
Sign In
Advertisement
in: Backer's Choice Characters, Characters in Argent: The Consortium, Chaons,
and 3 more

Welsie is one of the Backer's Choice for Fate of Indines, and was voted in in third place. She also appears in Pixel Tactics 3, and made her first appearance inArgent: The Consortium. Twice.

Aliens from the plane of chaos, or Chaons, come in varying degrees of power. Welsie is a low-powered Chaon with only an exceptional level of skill in time-control. She is naturally immune to causality, allowing her future selves to freely interact with past selves, or even team up with them in battle.

In Indines she has accomplished several notable achievements through the course of her timelines. At the time of Nostroos Callahan retirement as Argent's chancellor, Welsie occupied both the title of Professor of Chronomancy at Argent and one of the chairs in the Magisterial Council of Willat.

There are six different confirmed instances of her currently in Indines, but even the Welsies themselves can’t say if more are about.

In combat, Welsie is a quick fighter with awkward ranges and excellent mobility. She is a master-difficulty (expert players only!) fighter who relies heavily on her unique ability and on planning several beats in advance of the opponent

A: The Special Action card is treated just like a style and is turned face up, and is switched just like a normal attack pair. (Source: Fate rulebook) 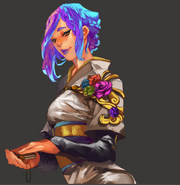