Xenitia is a Backer's Choice character included in Fate of Indines, voted in seventh place. Her first appearance was in Argent: The Consortium.

Xenitia is a vivimancer with the power to draw out life force from herself and others and to use it as a weapon. Her appearance gradually changes as she borrows the life from others and adds it to her own. Her exact age is unknown, but she has been around long enough that nobody remembers what exactly she looks like. Currently, Xenitia works at Argent while seeking a way to use her abilities to resurrect her dead brother and unravel the mystery of her own talents.

In battle, Xenitia uses weapons composed of life-force drawn from her own body. While capable of incredible destructive power, she risks being severely weakened if these spells are disrupted. 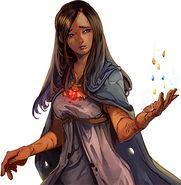 A: No. (Source: Fate Rulebook)