From a young age, Zaamassal had a different grip on reality and perception than those around him. His additional perceptions made him an outcast among peers, until he discovered the Planestalkers, an order of knights sworn to defend Indines from the horrors that lurk outside space and time.

On a routine mission, Zaamassal was lost between the dimensions, wandering for an eternity, surviving only because death did not live in the realms he traversed. The chaotic infinities twisted his unique senses further, and over uncountable years he learned just how strong the control his own senses had over reality was.

After wandering for countless ages, Zaamassal came to serve Oriana, a godlike being born from the primal chaos of the universe, who saw great potential in his abilities. Oriana sends Zaamassal back to Indines to capture Cherri Seneca and bring her back to the Plane of Chaos, to serve a further purpose in Oriana's plans. Zaamassal manages to thwart Luc and Khadath two agents sent to protect Cherri, and captures and returns her to the plane of chaos. On his quest, however, he develops a certain fondness for the girl.

When Oriana discards Cherri's spirit to use her body as a portal into Indines, Zaamassal is mortified. After being hardened to all horrors in the universe, he is shaken awake by this ruthless act, and realizes what sort of creature he has been aiding. Using his ability to warp reality, he gives Cherri a new form and helps her to escape back to Indines, now in the form of a mystical dream-creature called Lymn. Knowing that he has to challenge Oriana, but that he cannot return to the Planestalkers after fighting against them, he searches for new allies to aid him in the fight to protect his world.

Turning his gaze to the north, Zaamassal travels into Willat, searching for the power he needs to challenge Oriana himself. At the present, his whereabouts are unknown. What will he discover there? And what will he give up, for the sake of love and revenge?

Zaamassal has long dark hair and dresses in plate mail with a long blue cloak. He has a distinctive cross-shaped scar on one cheek.

Zaamassal is a stance-based fighter, able to change his fighting style to match his opponent. Additionally, he has limited control over space, able to warp his attacks to strike from further away or teleport himself. 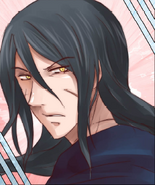 A: No, they are unable to continue moving once they move into the space adjacent to you. (Source: War rulebook)